Home » Kyiv not Kiev: Why spelling matters in your business relationships with Ukrainian partners?

Kyiv not Kiev: Why spelling matters in your business relationships with Ukrainian partners? 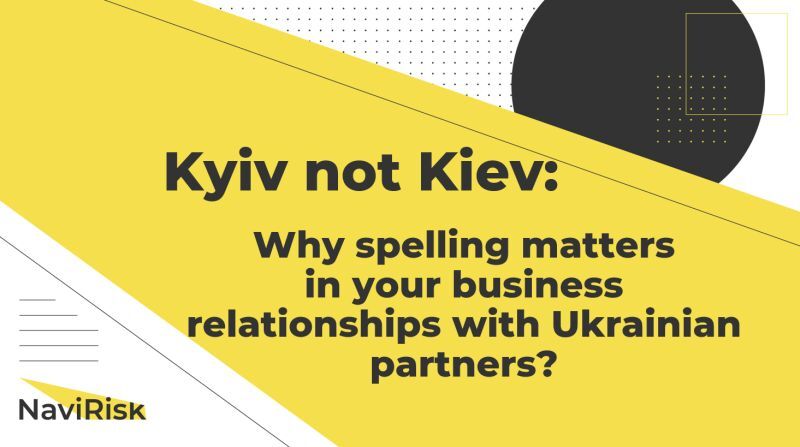 A number of global heavy weights have recently adopted the Ukrainian-language derived “Kyiv” as their official spelling for the country’s capital city, replacing the Russian-rooted “Kiev.” This trend began with The Associated Press in late August 2019. Since then, The Wall Street Journal, The Washington Post, The Telegraph, and the BBC have followed suit. It is worth keeping these nuances in mind, especially when starting cooperation with #Ukrainian partners or planning investments there.

This rush to #Ukrainianize spellings is not only a response to Kyiv’s sudden newsworthiness. It represents the latest chapter in a long-running campaign to secure recognition for the Ukrainian-language versions of Ukrainian place names and is part of a much broader post-Soviet drive to assert an independent Ukrainian identity.

These efforts have not always met with success. For example, the Ukrainian authorities first endorsed “Kyiv” as the official English-language spelling back in the mid-1990s, but beyond the rarefied world of diplomatic protocol, most members of the international community paid no attention and continued with the more familiar “Kiev” instead.

It is no coincidence that international attitudes toward the “Kyiv vs. Kiev” debate have undergone a radical transformation since 2014. Like so many other aspects of Ukrainian identity politics, Russia’s attack has electrified the issue, infusing it with entirely new meaning among domestic audiences and encouraging the outside world to think again. With Russian tanks parked in the Donbas, the continued use of Russian-language transliterations for Ukrainian towns and cities became not only absurd but also grotesque.

Ukraine’s #KyivNotKiev campaign will necessarily continue, but we may finally have reached the tipping point. “Kyiv” has now become the standard spelling in much of the English-language world, while those still clinging to “Kiev” risk accusations of outmoded thinking.

Ukraine’s desire for the outside world to use Ukrainian-language transliterations appears anything but trivial. On the contrary, it is a plea for symbolic support in what is one of world history’s last great independence struggles. Ukraine’s nation-building journey is far from over, but establishing Ukrainian names for Ukrainian places is an essential early step on the long road to recovery. The international media’s ongoing adoption of the preferred “Kyiv” spelling may seem inconsequential, but it represents a meaningful contribution to this process.

We perform basic #security tasks and prepare multi-level evacuation plans in case of armed conflict. The analysis of cultural conditions is one of the many areas that we present to our international clients. Please contact us to find more: info@wearenavirisk.com